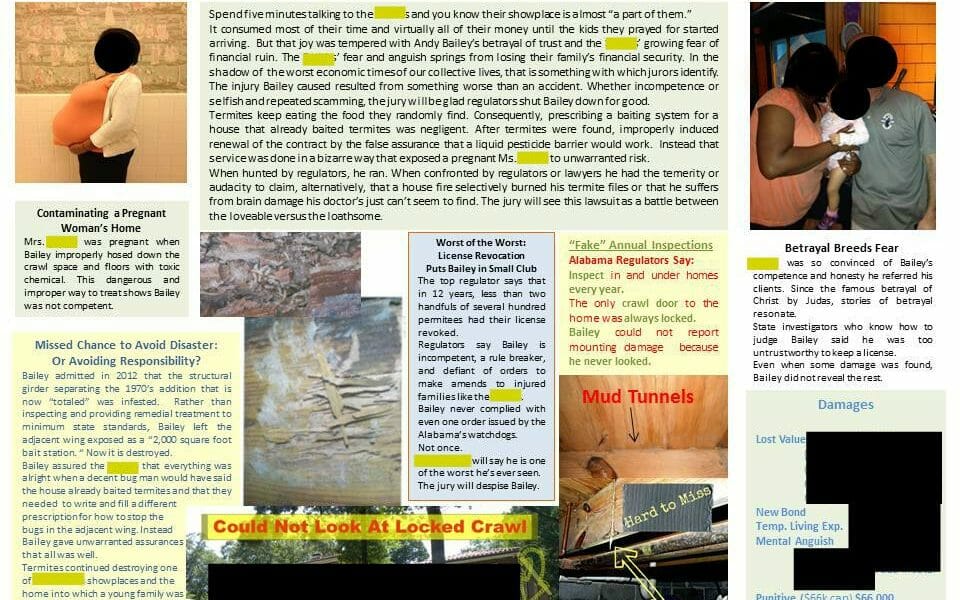 Folks with termite bait system should read this carefully. Why? Because you need to know that having quarterly inspection of the bait stations in the ground does is not enough. Pest control companies have to do annual inspections of your HOUSE. And they should last 45 minutes to one hour and go from the basement or crawlspace to the attic.

Bailey’s Pest Control lost their license with the State of Alabama. Kudos to our regulators. But prior to that the company caused plenty of injury. Bailey’s never inspected a showplace in the Birmingham area.All they did was check the traps. The crawl door to the house was locked. The homeowner did not know the crawl had to be inspected. Not that wing of the home has to be torn down. The floor joists literally are dripping with termite tunnels as Campbell Law PC attorney Keiron McGowin discovered when HE inspected the house. A nationally renown expert also found that problem – and more.

Lawyers at Campbell Law PC have recovered for thousands of families. But – it – is – never – easy.
If you have had a run-in with Bailey’s let us know. We need other victims to show the jury who will hear this case that our client’s are not alone.