Lack of Evidence of Termite Infestation 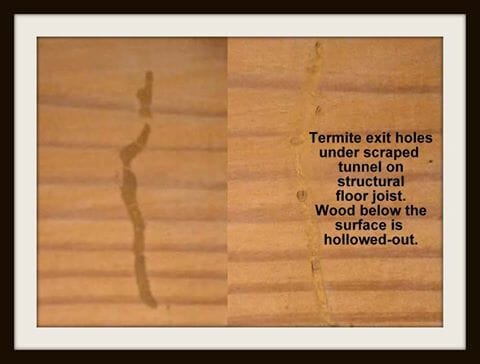 For the past forty-one years a homeowner has paid the same company for termite prevention. The company reported after every inspection that there was no evidence of termite infestation. But clearly this photo shows that a “termite tunnel” is present in the crawlspace of the home.

Usually, a termite infestation and the resulting damage stays hidden inside of the wood. When this tunnel was scraped, it found that termites were exiting the joist they had hollowed out to look for more wood to eat. Since none could be immediately found, the termites tunneled back into the wood.

Only living termites look for food, dead termites stop eating. When the company found damage from infestation had continued into others areas, the only logical conclusion that could’ve been arrived at was that the termites were actively eating the house. Accordingly, since the technician told the homeowners, who were in their 80’s, that there were no signs of an active infestation in light of the evidence means that legal fraud or at the very least negligence was committed by the tech.

Campbell Law PC will be pleased to hold this company responsible for breaching its professional duty that led to termite damage in every wall of the house and the roof.

The claim is in the Metro Atlanta Area. We look forward to doing what we can to help. If you have had have had similar problems contact Campbell Law PC