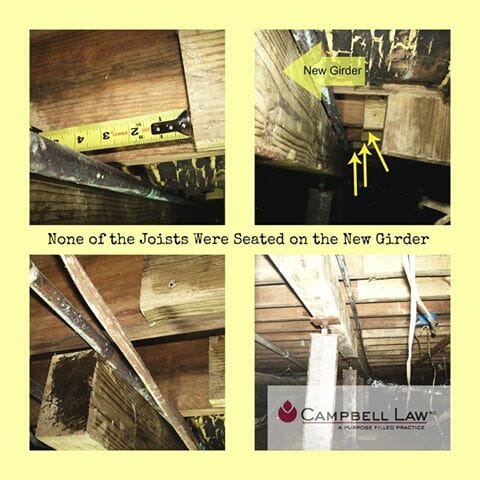 Contractors are great at talking folks into not pulling a building permit. Unless you have the ability to tell that a job complies with your local building code, you should demand one.

It is also a good idea to be present when the inspector comes so you can make sure all work is inspected and to tell the inspector that code-compliance is important to you. This widow needed someone to install a good brace for the termite-damaged floor system at her home.

The contractor promised to install a new girder that would rest on screw jacks. New joists would sit on the new girder on one end and the existing foundation wall on the other. After announcing that all the work was done in the dark and wet crawl space, the homeowner paid the bill.

The repair work is reflected in this collage. As you can see, not a single joist rests on the new girder. The girder was simply shoved under the badly damaged existing joists. Overall, nothing meaningful was done to support the floors. A building inspector would have never approved this work if it was inspected.

A building inspector may also be tempted not to crawl under the house – hence, the recommendation to be present when the building inspector is on sight. Like negotiating nuclear arms agreements with Russia, “trust, but verify” is a good principle to follow.